I first came across this variegated tree mallow, Lavatera arborea ‘Variegata’,  whilst browsing a seed catalogue in 1999 and fell in love with the description (there were no pictures or website to look at). I ordered a packet, sowed the seeds and was impressed at the ease and speed at which it grew. 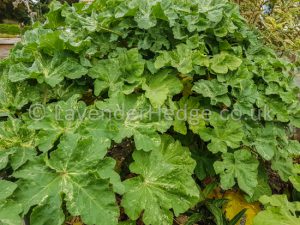 The leaves were huge and velvety and in the right conditions turn more creamy yellow than green. In its second year the beautiful purple flowers, rather like an hibiscus appear. It was classified as a biennial, so I wasn’t surprised when it eventually died off. 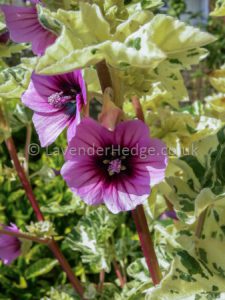 However ever since then, seedlings appear round the garden. They don’t appear every year, just when the conditions suit them I suppose, and this year was such a year! I’ve had about six seedlings germinate this year – all in the ‘wrong’ place of course! One plant grew so large in a matter of months, that I have had trouble removing the woody trunk it has produced. The smaller plants I have moved to more suitable positions in the hope that they will develop and flower next year.

This is a great choice of plant to fill in spaces whilst you are waiting for the slower, choicer shrubs to grow.