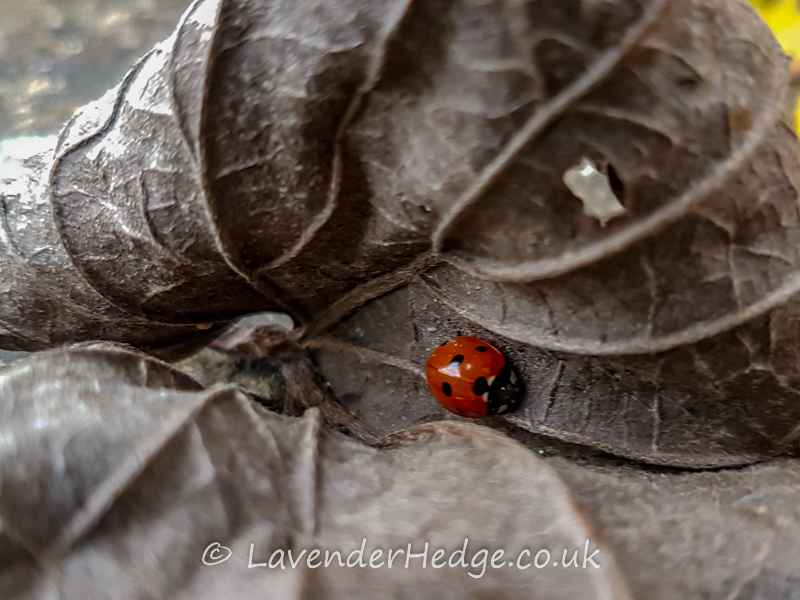 With many of our gardens showing signs of spring, lots of us will be keen to get outside and begin clearing our borders and pruning back those wayward shrubs.Continue reading

Spotted the first ladybird of the year today – a Seven spot ladybird. We hardly saw any last year and as a result had so many aphids on the runner beans. I do hope this little lady survives and has lots of babies to eat the aphids! The Autumn equinox seems to be an appropriate time to review what’s worked this year in the kitchen garden and what we have still to look forward to. The runner beans have been a real disappointment this year. The cold spring, a bad attack of black fly and the hot dry summer have not suited them at all. Ladybirds were a rare sight this year and the black fly thrived, despite the plants being surrounded by calendula and French marigold flowers which are supposed to repel them. Interestingly though the climbing beans were unaffected by the black fly.

The runner bean and French climbing bean plants have been taken down and the canes put away for another year. I have left the root balls in the ground so the nitrogen they contain can seep back into the soil. I’ve noticed that the cost of vegetable seeds has risen quite a lot in recent years, due to the popularity of growing your own. It’s worth trying to keep some seed if you can and runner bean seeds are one of the easiest to save. Just choose some of the beans that have large seeds in, dry the pods out and remove the seeds. Keep in a cool, dry place and they will germinate well next year.

The purple sprouting is growing well, although the cabbage white butterflies had managed to get through the netting to lay their eggs. I found lots of small caterpillars busy chomping their way through the leaves! So, caterpillars have been removed, plants staked to stop the wind rock and the netting has been replaced. We now look forward to picking it next spring.

It has been a good year for potatoes and we are still eating our way through the harvest. The Charlottes are still being cooked with their skins on and taste so good. We’ve had a couple of pickings off the sweetcorn, but these were probably a bit on the small size due to lack of rain, but still very sweet. Durham Early cabbages have been planted out for an early spring crop, well protected from the numerous pigeons that frequent the neighbourhood!

We replanted the strawberry bed this spring, so didn’t expect many strawberries. We did get a reasonable crop though. The plants are looking so healthy now and looking forward to next summer!

We are still picking autumn raspberries and these will continue for a few more weeks. Have frozen a load for the Christmas trifle. The old canes on the summer raspberries have been cut out and the new ones tied in. In the greenhouse, it has been a good year for tomatoes and I even managed to get a good crop of cucumbers this year. The shading worked well and seemed to have got the watering about right. Since the tomatoes had more or less finished, I picked the remaining ones and removed the plants. The green tomatoes are in the fruit bowl next to the bananas and are slowly ripening. In their place I have put in some lettuce plants, which hopefully will be mature before the first frosts. When it begins to get a bit colder I will attach bubble wrap to the inside of the greenhouse, which will help protect them.

I hope your allotments and vegetable gardens have provided you with lots of yummy fruit and veg. Don’t give up if you have had disappointments, that’s gardening for you and there is always next year to look forward to! Picked my first ripe tomato today and ceremoniously ate it for lunch – it was delicious. The rest of the tomatoes are still looking very green though, so I have removed some of the leaves on the plants, to help them ripen.

The runner beans are not coping well in this hot weather and the beans are going to seed before they get the chance to grow.  Have been watering them every few days, but all it does is keeps them alive, just! The aphids are still a huge problem, making the plants look sick with curling up the leaves. The organic insecticide we used, I think, was ineffective – possibly been in the shed too long. Tried spraying some diluted Ecover washing-up liquid on the leaves yesterday, which may have helped, it’s difficult to tell. However, found some ladybird eggs on the underside of some of the leaves tonight, so am going to give the ladybird larvae a chance to eat the aphids before any more spraying. Spotted two ladybirds as well, one of which was spotless! The runner beans are still not big enough to pick at the moment and I suspect they don’t like this heat. Unfortunatley they are severely infested with blackfly, even though I planted marigolds around the plants. Despite our best efforts we cannot seem to get rid of the blackfly by squashing them. Even spent an hour the other night hosing them off, only for them to return the following day. Have now resorted to using an organic insecticide, suitable for vegetables.

I discovered a lone ladybird on the beans tonight, the first seen this year – just need a few more to join him!

We are picking the climbing beans most days. They get placed in a bag in the freezer and kept for winter meals. They seem to freeze better than the runner beans, which seem to get a peculiar taste when frozen. Strangely these beans do not have any blackfly on the leaves at all. Even some runners planted in the same row have blackfly, but not the climbing beans.